Posted on February 10, 2016 by AnaheimBrewery 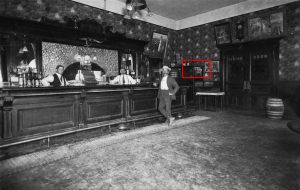 We like to say Anaheim Brewery is “where the past has presence.”  The oversized black and white photos of pre-Prohibition bars in Anaheim give you the feeling of sharing the Tasting Room with folks from the past.

If you look closely at the photo of the Hotel Valencia bar, you may have noticed a small sign hanging on a cabinet in the right side of the picture.

Here it is in close-up:

The image is a little fuzzy, but you can make out:
Union Brewing Co
Anaheim Beer
For Sale Here

Our friends, Kevin Kidney and Jody Daily created a reproduction of the sign.  They placed a photo of Friedrich Conrad in the circle beside the big A, and included the phrase:  In Pursuit of Happiness &  Lager.

That phrase is a quotation from the Anaheim Gazette.  Back in 1873, an athletic club from Los Angeles took the train to meet their Anaheim counterparts.

“The excursionists arrived about 10 o’clock, a.m., and were received by their friends with open arms and the firing of anvils. With their banner flying, and preceded by the Los Angeles Band, they marched through the principal streets to the Verein Hall, where an impromptu exhibition of agility was given after which they dispersed, and went in pursuit of happiness and lager.”

Twenty bucks gets you one of these embossed aluminum signs.  Put on your own “exhibition of agility” as you hang it on the wall of your Man Cave, then fire an anvil (whatever that means) and go off in pursuit of happiness and lager.