Oktoberfest and the Mayor’s Mallet

Posted on September 14, 2016 by AnaheimBrewery 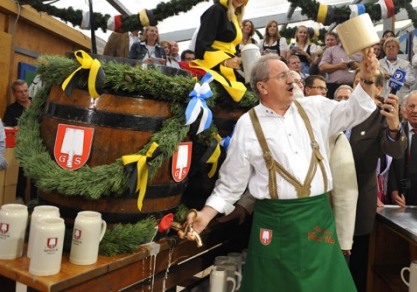 The mayor of Munich in gets his mallet in position.

Back in 1950, the organizers of the Munich Oktoberfest got the bright idea to have the mayor tap the first keg to kick off the event. Mayor Thomas Wimmer wasn’t exactly a natural. It took him over 15 hits with a wooden mallet to get the tap fully engaged. When he shouted, “O’ zapft ist!” meaning “It’s tapped!”, a tradition was born.

Nowadays, the mayor of Munich is expected to quickly tap that first keg with one or two wallops. There was a bit of a scandal a few years ago when the new Munich mayor was found to be practicing in secret with a brewmaster. 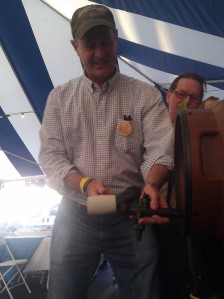 Mayor Tom Tait tapping the keg at the inaugural Anaheim Brewery Oktoberfest in 2011.

Our own Anaheim Mayor, Tom Tait, need no such behind-the-scenes training. He’s a natural. Since our Grand Opening in July of 2011, he’s been tapping the first keg at as many festivals as he can.

Come see Mayor Tom Tait in action at 4 pm on Saturday, October 1st, when he starts the festivities with the ceremonial tapping of a keg of Anaheim Oktoberfest Lager.

Like Loading...
This entry was posted in Anaheim Brewery and tagged anaheim beer, anaheim brewery, oktoberfest. Bookmark the permalink.