Posted on January 5, 2016 by AnaheimBrewery

2016 marks the beginning our fifth year of brewing in downtown Anaheim, and we’re planning a series of special events and beers to celebrate.

To start things out with a bang this month, we’ll release our Anaheim Bockbier.  At 6 pm on Friday, January 8th, the Mayor of Anaheim will tap a special cask of unfiltered “Kellerbock” as a preview to the full release the following week. Mayor Tom Tait will present the Mayor’s Trophy to Greg and Barbara Gerovac for winning Brewery of the Year at the 2015 OC Fest of Ales.

Anaheim Bockbier is a classic golden-colored strong lager.  Despite its strength of 8% alcohol by volume, Anaheim Bockbier is smooth and drinkable.  While there is a lot of variety among the Bock beers of the world, ours is quite traditional – full-bodied, slightly sweet, with a hint of a floral note.

Bock beers are most associated with the town of Einbeck, in northern Germany (about halfway between Kassel and Hannover).  As far back as

the middle ages, Einbeck was famous for its excellent strong lager.  By the 1300’s, the city was exporting its beer to countries from Britain to Russia.  Einbeck actually had a city-wide quality control system, under which citizens could brew their own beer, but the brewing equipment was owned by the city council; a professional brewmaster took the equipment to the homes of people who wanted to brew, oversaw the brewing process, and certified the quality of the beer.

By the 1500’s, the Bavarian city of Munich was importing beer from Einbeck – so much that they hired a brewmaster from Einbeck to produce their own version of the strong lager.  Bavaria is a lot like our own deep south – accents can be startlingly different, and in Bavarian, “Einbeck” sounds a lot like “Oanbock.”  The word Bock, in German, translates to “goat,” which is why so many Bock beers feature a goat on the label.

A Cool Story About the Goat and Bock Beer 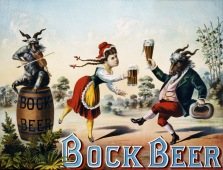 After Munich started to produce its own “Bock Bier,” a brewmaster from Einbeck came to town.  He claimed, of course, that his original, northern brew was stronger.  Of course, the Bavarian brewer disagreed, and the two decided to settle the question with a drinking contest (like you do).  Each brewmaster would drink the other’s beer until one could no longer stand.  The contest went on for several hours, and drew quite a crowd in the brewery’s courtyard.  Someone left a gate open and a goat (a Bock) ran in and knocked the Einbeck brewmaster off his feet, making the Bavarian the winner.  “No fair,” cried the northern man, “a Bock knocked me down!”

“Yes,” replied the Bavarian, “and I brewed it!”

Our label, designed by Jody Daily and Kevin Kidney, features a “Bock” admiring a glass of Anaheim Bock.  Wearing traditional lederhosen, he’s enjoying his beer beneath the tree in our beer garden.

Enjoy Anaheim Bock, and as always, drink responsibly.  But if you see any goats in the Beer Garden . . .