Posted on January 21, 2015 by AnaheimBrewery

After a three-year hiatus, it’s time for a Bockbier again!

Our latest seasonal offering is Anaheim Bockbier, a classic golden colored Maibock, just about 8% abv. This lager is full-bodied, but finishes clean, with a slight floral note. Despite its strength, Anaheim Bockbier is smooth and drinkable.

Bock beers originate in the northern German town of Einbeck. As far back as the middle ages, Einbeck was famous for its excellent strong lager. By the 1300’s, the city was exporting its beer to countries from Britain to Russia.

By the 1500’s, the Bavarian city of Munich was importing so much beer from Einbeck that they hired a brewmaster from Einbeck to produce their own version of the strong lager. When Bavarians say “Einbeck” it comes out more like “ein bock.” In German, “Ein Bock” means “a male goat.” That’s why most Bock beer labels feature a ram.

Greg likes to tell this story about the goat and bock beer: 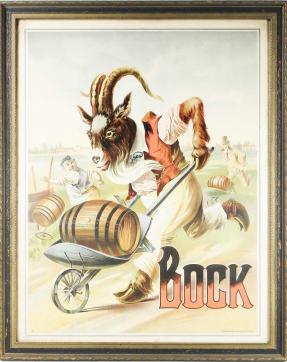 After Munich started to produce its own Bockbier, a brewmaster from Einbeck came to town. He claimed that his original, northern brew was stronger. The Bavarian brewer disagreed, and the two decided to settle the question with a drinking contest, you know, like you do. Each brewmaster would drink the other’s beer until one could no longer stand. The contest went on for several hours, and drew quite a crowd in the courtyard. Someone left a gate open, and a goat (a Bock) ran in and knocked the Einbeck brewmaster off his feet, making the Bavarian the winner. “No fair,” cried the northern man, “a Bock knocked me down!”
“Yes,” replied the Bavarian, “and I brewed it!”

Enjoy Anaheim Bock, and as always, drink responsibly. But if you see any goats in the Beer Garden . . .