Anaheim 1888, our flagship beer, won a Silver Medal at the 2014 California State Fair Commercial Craft Brewing Competition.  This competition is limited to beers brewed in the State of California.

Greg Gerovac, one of the brewers and owners, says “We are thrilled that our flagship beer placed so high among such outstanding competition.” Over 850 entries were submitted in 30 categories. 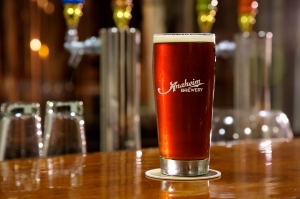 A perfectly poured glass of Anaheim 1888.

Anaheim 1888 earned the Silver Medal in the Amber Hybrids category. Anaheim 1888 is a copper-colored lager, full-flavored and hopped with generous amounts of Centennial hops. “It is based on the style of beer that the original Anaheim Brewery produced in the late 1800’s, and is brewed exclusively with Muntons Malt from England,” says the other brewer and owner, Barbara Gerovac.