Oktoberfest: the Festival, the Beer, and the Party

Undoubtedly the most famous beer festival in the world, Oktoberfest is a sixteen-day event held each year in Munich, Germany, running from late September to early October.   The tradition began with a Royal Wedding in the early 1800s.  Crown Prince Ludwig (of Bavaria), later King Ludwig I, married Princess Therese of Saxony-Hildburghausen (that’s north of Bavaria) on October 12, 1810.  The citizens of Munich were invited to attend the festivities held on the fields in front of the city.  The fields were renamed Theresienwiese (“Theresa’s Fields”) to honor the Crown Princess, although the locals have since abbreviated the name to “Wies’n”.  Horse races were held as part of the festivities, and the decision to repeat the horse races in subsequent years gave rise to the tradition of Oktoberfest.  By In 1896 the beer stands were replaced by large beer tents and halls set up by Munich’s breweries.  The Munich Oktoberfest celebrated its 200th Anniversary in 2010; only wars and a cholera epidemic have interrupted the yearly beer celebration.

In the 1800’s, before the invention of refrigeration, it was impossible to brew beer in the summer due to the hot weather.  Brewing in Munich ended in spring, and began again in the fall.  The last brews of the year were brewed in March (Märzen, in German).  These beers were brewed stronger, so they would store better, and were kept in ice-packed caves and cellars over the spring and summer months.  In the fall, it was traditional to drink up all of the last year’s strong beer in order to make room for the new beer about to be brewed.  That’s why most of the beer at fall festivals (like Oktoberfest) are “Märzen” beers.  Märzenbier is full-bodied, rich, toasty, typically dark copper in color with a medium to high alcohol content.  Over the years, the common Munich Oktoberfest beer served at the Wies’n has gotten a bit lighter in color, but it still contains roughly 5.0-6.0% alcohol by volume. 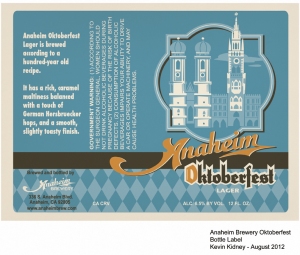 Anaheim Oktoberfest Lager is brewed according to a 100 year old recipe in a traditional Bavarian style, copper-colored and strong (around 6.5% alcohol by volume).  It has a rich, caramel maltiness balanced with a touch of German Hersbruecker hops, and a smooth, slightly toasty finish.

We learned our Oktoberfest recipe from Greg’s first boss, Chris, who trained at the Paulaner Brewery, in Munich.  As an apprentice, Chris had to keep a journal and write an entry every work day.  One day, Chris was exploring the tunnels and basements of the Hacker brewery, which Paulaner owned.  He came across a room full of very old wooden beer barrels.  On top of one barrel was a dusty leather notebook full of hand-written recipes.  Chris took the book to the brewery historian, who pronounced the notebook “about 100 years old.”  Chris copied out the recipe for Oktoberfest Märzen from the leather notebook as his journal entry.

The story of Chris and the leather notebook became Greg’s first journal entry, when he was Chris’ apprentice in 2001.  That year, Chris assigned Greg the task of converting the 100 year old recipe to use at the 50-barrel brewery where they worked.  Chris did the conversion as well.  The next morning they compared recipes and although they were different, Chris told Greg they would essentially make the same beer.

The first steins of beer at last year’s Anaheim Oktoberfest.

This year, we’re hosting our own Oktoberfest, right in the Beer Garden.  Get ready to do the Chicken Dance to music by the German-American Brass Band of Southern California.  We’ll have authentic German-style pretzels, plenty of bratwurst and sauerkraut, and of course Anaheim Oktoberfest Lager!  So join us on Saturday, October 13th, between 3 and 10 pm.  Ein Prosit!

1 Response to Oktoberfest: the Festival, the Beer, and the Party