Posted on August 9, 2012 by AnaheimBrewery 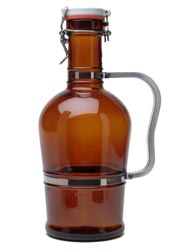 Just occasionally, a guest asks us why the big brown refillable jug is called a “growler.”  While we’ve heard a few theories, the most credible comes from the supplier who imports our growler from Germany.

In the early 1900’s, before Prohibition, most beer was served on draft, at saloons.  If workmen wanted a beer to go with their lunch, or if a family wanted beer for dinner, they had to get it from the local saloon.  Usually this meant sending a young boy to the saloon to fetch the beer.  The most common container for the beer was a plain, galvanized steel pail, with a tight-fitting lid.  Some accounts say the pail was rubbed with lard, to prevent the beer from foaming (and resulting in a better “fill”).  As the boys would run back to the work site or home for dinner, as the case may be, some carbonation would escape from the pail, causing it to rumble, or “growl.”  The container earned the name “growler,” and the person carrying it was said to be “rushing the growler.”

Other stories say that it was the constant conflict between the saloon keeper, selling a less-than-full pail of beer, and the customer, looking for a full pail,  which caused the “growling”.

Either way, before Prohibition, the growler trade was an important part of any saloon’s business, and saloon keepers usually sold beer out of the back door, which they dubbed “the family entrance.”  This kept the young boys from having to walk through the saloon, and perhaps see something they shouldn’t!

Growlers were even a part of our own Anaheim history.  Consider this excerpt from Mildred Yorba MacArthur’s book (with the somewhat wordy title “Anaheim The Mother Colony, Compiled and Written in Honor of the Original Colonists”):

“Fritz Ruhmann is always spoken of with great respect.  His emporium was on North Los Angeles Street.  Children who were sent for a bucket of beer for a family meal always went to the rear door.  While they waited they were rewarded by a look at the festivities within and were given a bit of free lunch, and sometimes a glass of pink lemonade.”

You may recognize Fritz Ruhmann as the original “Five Cent Fritz” whose face is on our taster flight tokens.

Of course, here at Anaheim Brewery, we don’t fill metal pails with beer,  we use a top-quality German glass container.  We dispense the beer from our unique, Russian-made filling machine, “Boris,” which flushes any air out of the bottle, replaces it with carbon dioxide, and fills the bottle under pressure.

Stop by and pick up your very own “growler,” or come back and get your growler expertly refilled by our Tasting Room Staff!

2 Responses to Why a “Growler?”