The last time Anaheim Brewery produced a beverage, the only movies were silent ones that you had to go to the movie theater to watch!

We made history this weekend by brewing our first batch in the modern Anaheim Brewery.  Beer hasn’t been made in downtown Anaheim since Friedrich Conrad relocated the original Anaheim Brewery from Adele Street out to West Broadway back in 1888.  To commemorate the occasion, we made our signature beer, Anaheim 1888.

According to One Hundred Years of Brewing, published in 1903, Friedrich Conrad “founded a steam beer plant, which, under his continued proprietorship, has generally become known as the Anaheim Brewery.  Lager beer is now manufactured and bottled, and malt is made upon the premises…F. Conrad, a Bavarian, came to San Diego in 1866, when a boy of seventeen, starting a cooper shop there.  In 1870 he located to Anaheim where he founded a winery, and later, as stated, he established his present brewery.”

What, you ask, is “steam beer?” This historic beer, associated with California, was brewed 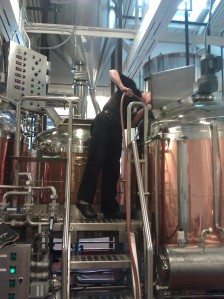 with lager yeast without the use of refrigeration. It was an improvised process, originating out of necessity, perhaps as early as the Gold Rush.  In 19th-century California, refrigeration and ice were unavailable to brewers. California brewers were forced to use lager yeast at higher ale temperatures. These days, Steam Beer is most associated with Anchor Brewing, who have trademarked the name “Anchor Steam Beer.”

The flavor of beer is influenced by the strain of yeast and the fermentation temperature. Lager yeast is best used at cool temperatures, around 50 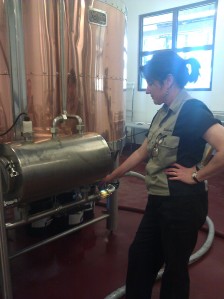 Barbara Monitors the Transfer to the Kettle

to 55 degrees, while ale yeast is best used at temperatures about 10-15 degrees higher. Fermentation by ale yeasts produces beer that has distinctive fruity flavors and aroma. Steam Beer uses bottom fermenting lager yeasts at ale temperatures, which results in a very distinctive flavor profile that includes both ale and lager characteristics.

Anaheim 1888 is just this style, and we thought it fitting to make history by brewing a historic style of beer, once famous in Anaheim.

Like Loading...
This entry was posted in Anaheim Brewery, History and tagged anaheim brewery, friedrich conrad. Bookmark the permalink.