Posted on January 10, 2011 by AnaheimBrewery 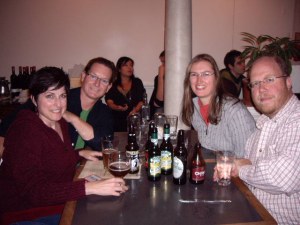 A few years ago, we were enjoying beers at Pizzeria Paradiso, on P Street NW in Washington DC.  They have an amazing and instructional beer list.  Bill and Christie Newman are great friends – they love beer, and are avid homebrewers, as well as certified beer judges.  So we were drinking and discussing beer, when the subject of “what’s your favorite beer” came up.

He explained that for him, it wasn’t just about the beer.  There are so many beers and beer styles available.  Some of them are so distinct it’s hard to compare them.  Think about a classic English Pale Ale, briskly hoppy, dry and crisp.  How about an Imperial Stout, with its full body, opaque black color, and massively roasty flavor?  Compare that to a Belgian Witbier – light, elegantly fruity, with a creamy texture.  Or the unique Gose beer, a traditional, top-fermented, pre-lager, beer style of Leipzig, brewed with malted wheat, coriander and salt, and sometimes oats…

Bill went on to explain that your Favorite Pint couldn’t be just about the beer.  It’s also about your mood, where you are, whom you’re with, and what you’re doing.  Are you drinking exotic Belgian ales in a DC pizzeria with close friends?  Or are you alone in a pub in England, enjoying a real ale after a day’s work?

Now the crucial question – what is our favorite pint?

We were spending a long weekend in Montana to celebrate the wedding of our friends, Maggy and Dan.  Bill and Christie Newman were there, too, and the day before the ceremony, the four of us hiked up into the mountains to a waterfall.  It was so beautiful, you didn’t know which way to look – behind us, the waterfall, in front – the snow covered mountains and pristine, blue lake.  As we caught our breath and rested, Bill surprised us with two bottles of Pilsner Urquell that he had brought in his backpack. 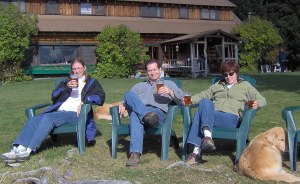 After admiring the view, we hiked back down the mountain to the lodge, and located much-needed beer.  The brew of choice was an Oktoberfest beer, brewed by Bayern Brewing in Missoula (itself a great destination).  We took them outside to the lake’s edge, where we sprawled in Adirondack chairs, enjoying our well-earned Oktoberfest.  As we gazed across the lake to the mountains, one of the lodge dogs, a amiable golden retriever, stretched out at our feet.

That is our Favorite Pint.