Day of the Dead, Part Three

Posted on October 28, 2010 by AnaheimBrewery

Did you know that Anaheim’s first law enforcement official to die in the line of duty was killed behind the original Anaheim Brewery? 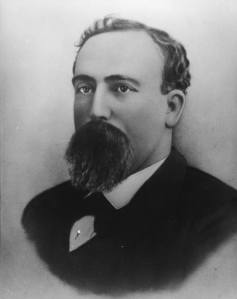 David "Dye" Davies: Is this the man who shot Marshal Lehman?

Even stranger, he accused his own Constable of firing the fatal shot.  Mind you, David “Dye” Davies had been the town’s marshal two years earlier and was “a frontier gunfighter and gambler to whom the element of danger was unknown.”

Marshal Charles F. Lehman had been in office a mere two months when he was called to a disturbance behind Samuel Goldstein’s Anaheim Brewery on Center Street.

Here are the details hot off press of the Southern Californian on July 27, 1872:

A dark and bloody tragedy has stained the fair name of our usually quiet town. A man has been killed-an officer-shot down in the faithful discharge of his Duty, in endeavoring to preserve the public peace. A citizen, a husband and a father has been hurried out of existence, as the result (in the most charitable view we can take of it) of the disreputable quarrel of two men over the game of cards.

David Davies, a constable of this township and a man giving his name as Horton were playing cards last Sunday at the Anaheim Brewery. About 6 P.M. a dispute arose as to the winnings. Horton took the checks and Davies seized the money. Horton immediately grabbed Davies revolver and the latter as promptly secured another. The parties commenced firing and the fight was transferred to the street and thence to the vacant lot between the brewery and Macy’s harness shop. Here Chas. F. Lehman, also a constable of this township and late marshal of the city, interfered as a peace officer to quell the disturbance and received a fatal shot through the body, the ball entering in front an inch below the sternum and ranging downwards, passing through the left lobe of the liver and the cardiac muscle of the back about two inches to the right of the spinal column, where it was found and extracted soon after.

Horton ran away and was pursued by an excited crowd who soon captured him in Mr. Lorenz’s vineyard and lodged him in jail. Mr. Lehman was taken into the drugstore of Dr. Higgins, and thence to the residence of Mrs. Brown where he expired of 7:30 P.M. Tuesday, the 23rd. It had been generally supposed that Horton fired the fatal shot, but Mr. Lehman declared that Davies shot him and remained firm in his statement up to the time of his death. On Wednesday, the 24th, at 11 A.M., an inquest was held upon the body by John W. Clark, Esq., acting coroner, with the following results:

Verdict of the Coroner’s Jury – We, the undersigned, the jurors summoned to appear before the corner at 11 A.M., on the 24th day of July 1872, to inquire into the cause of death of Charles Lehman, having been duly sworn according to law having inspected the body and being present at the postmortem examination of Messrs. D’Assonville and Hardin, physicians of Anaheim, each and all do say:

That we find the deceased was named Charles F. Lehman, was a native of Danzig, in Prussia, was aged about 44 years; that he died on the 23rd of July about 7:30 o’clock P.M. from the effects of a pistol shot received on the 21st of July, at about 6 o’clock P.M., near Goldstein’s saloon, in Anaheim, during the discharge of his official duties of constable; the fatal shot having been fired by one if the two parties named – Horton and Davies, who are not under arrest and in court for examiner. All of which we duly certify by this inquisition in writing, by us signed the 24th day of July 1872.
John Fischer, foreman, Peter Richards, J.B. Stone, L. Jandee, J.C. Hill and C.H. Smith.

A postmortem examination was at the same time held by Drs. D’Assonville and Hardin, revealing the nature of the wound as above stated.

Another strange thing is that while on his deathbed Marshal Lehman gave his infant daughter to the unmarried daughter of his friend, explaining that he felt that his wife was too young to care for their child.  His wife was about 18 years old; there is no record of the foster mother’s age.

Horton was placed under arrest and Davies was placed under guard during the investigation of the shooting.  Constable Davies was taken to Los Angeles to stand trial for the manslaughter of Marshal Lehman. The trial was attended by many of Anaheim’s citizens. Davies was acquitted of the charges and returned to Anaheim where he continued serving the Anaheim Township as a law enforcement officer for many years. Davies passed away on May 10, 1885 and was laid to rest in the La Verne Cemetery. 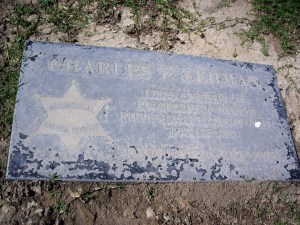 Marshall Lehman was buried in the Anaheim Cemetery on Sycamore Street.  In 1995, 123 years later, the marker shown here was placed near the original entrance to the cemetery.