Day of the Dead, Part Two

Notable Souls of the Anaheim Brewery

The second owner of the Anaheim Brewery was Friedrich Conrad.  Friedrich was born in Bavaria in 1849.  He trained as a cooper (barrel maker), and came to the United States when he was 17 years old.  He opened a cooperage in San Diego in 1866.  Four years later, he moved north to Anaheim.  By 1872, Friedrich was operating the California Brewery on Third North Street (now Adele).

Friedrich’s first wife, Augusta, died on September 4th of 1877.  According to 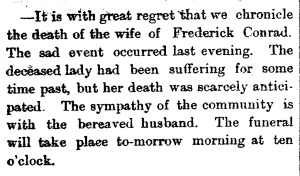 the Anaheim Gazette, she had “been suffering for some time past, but her death was scarcely anticipated.”  Augusta Conrad was buried in the Anaheim Cemetery on East Sycamore Street.   Her grave marker was likely wooden, and is no longer visible.

Friedrich eventually took on the name “Anaheim Brewery” for his operation.  He expanded the brewery, and made the brand great.   Since Friedrich ran the company the longest – more than a quarter of a century, we honor him as the Founder with a capital F.

In November of 1881, Friedrich married a woman from Baden named Charlotte Reinle.  By 1887, they had four children:  Lorraine, Fred, Lily, and George.

In 1904, Friedrich sold the brewery, and opened a wholesale wine and liquor store.  Around 1909, he and Charlotte retired to Los Angeles, leaving their sons in charge of the business.  Tragedy struck a year later when George fell ill with typhoid fever and died at the age of 23. 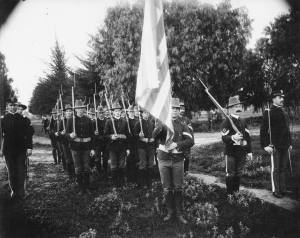 George Conrad had been a member of Company E, 7th Regiment, National Guard of California.  The Anaheim Gazette reported that the flag above the armory flew at half mast in George’s honor.   The company escorted his remains to the train depot, in time for the noon train to Los Angeles.  His grieving parents buried him in the Hollywood Forever Cemetery. 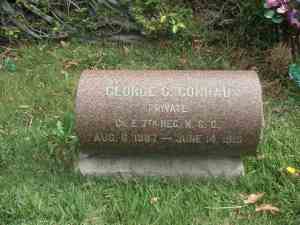 Friedrich lived into his eighties.  He died at home in 1933.  Charlotte died a short two years 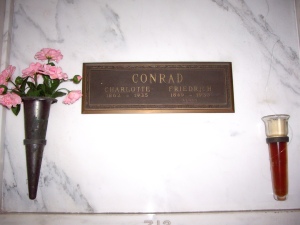 later.  Friedrich’s ashes and Charlotte’s remain rest together in the Cathedral Mausoleum in Hollywood Forever.  We paid our respects, and presented some Oktoberfest beer in honor of the Founder.